Want to celebrate New Year's Eve, but haven't a clue how to do so?

Maybe some of these New Year's Eve pa 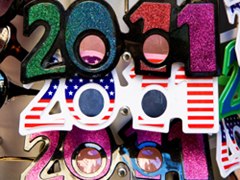 rty ideas will help you bring in 2011.  These New Year's Eve ideas include things like cheap DIY decorations, cool 2011 party glasses, exotic jellyfish shooters, and even kids countdown party favors.  If you're planning on spending the New Year's alone, there's some help for you, too.

Threadbanger has some great (and CHEAP) New Year's Eve party ideas in this video.  First, learn to make some handmade snow-white shimmery streamers with paper and galvanized wire.  Then, move on to the hors d'oeuvres— some endives and goat cheese olive bites.  Lastly, if you're having a raging New Year's Eve party, it's best to stick to the cheap champagne flutes, and you can decorate them with numbers to help your guests count down to the New Year.

What's better than some cheap, homemade, paper party glasses to ring in the New Year?  Nothing.  This Howcast video outlines the complete process to making this decorated eyewear, but you should probably make one minor change, since this is a video tutorial from last year— change the "2010" design to a "2011" design.  Just think if you forgot to change the date on these party glasses— you might be sending your fellow partygoers the wrong message!

For this simple project, you'll need a pair of sunglasses, drawing paper, a pencil, scissors, cardboard (or poster paper), and decorations.

For New Year's Eve, you need some really impressive drinks to control the crowd, and champagne ain't cutting it these days, at least during the main party.  So, if you're looking to wow, these slimy looking shooters make it seem like an exotic Japanese drink with real jellyfish inside!  But rest assured, no jellyfish were harmed in the making of this alcoholic beverage.  Just some Irish Cream, crème de cacao, amaretto and a little grenadine.

Relax & Have Fun with a New Year's Eve Night at Home

Okay, if you're not much for the overcrowded drunkenness, then perhaps a nice, comfy night at home will suffice?  Spend it with your loves ones, your friends, and any other chill beings you know of.  Watch a movie, cook a steak, watch the ball drop— have a peaceful night to ring in 2011.

Just because it's the quintessential party night, doesn't mean you can forget about the kids!  They want to celebrate the coming of the New Year, too!  Learn to make these cheap countdown party bags for the children, full of all kinds of goodies, because Christmas just wasn't enough.  FamilyFun shows you how.

The party is the biggest thing to worry about, but what about those nails?  Creating some cool celebratory nail art is the perfect way to show everyone up at the New Year's Eve bash.  Check out this video from YouTube user julieg713, but don't forget— change the year form 2010 to 2011!

Check out these other great ideas for helping your New Year's Eve celebration be one to remember.

Also, check out some photography tips to make sure you're properly documenting your New Year's Eve memories— How To Take Great New Years Pictures This New Year's Eve (7 Tips for a Wild Night).

Want to master Microsoft Excel and take your work-from-home job prospects to the next level? Jump-start your career with our Premium A-to-Z Microsoft Excel Training Bundle from the new Gadget Hacks Shop and get lifetime access to more than 40 hours of Basic to Advanced instruction on functions, formula, tools, and more.

Other worthwhile deals to check out:

Join the Next Reality AR Community

Get the latest in AR — delivered straight to your inbox.